Why a “Time Capsule?”

From the start, we knew this wasn’t a “collector’s edition” per se. The Time Capsule does not actually contain the game, We Happy Few.

The game, We Happy Few, originally started off as a rouge-like procedural game. Following the first trailer at PAX East 2015,  public interest for the world and story of We Happy Few skyrocketed. In it’s state then, We Happy Few was fairly different from what is on the shelves now; it was more rouge-like and procedural. Excitement for the game led to an increase in scope for the development of the game, including a Kickstarter campaign. Later, Compulsion partnered with Gearbox Publishing, and WAYPOINT was brought on later to helm the Time Capsule.  The history of how We Happy Few came to be is interesting, and you can read more in-depth from Compulsion’s blog here.

Because of the initial kickstarter campaign, many fans had already purchased the game through Early Access. Collector’s editions are, unsurprisingly, usually bought by the most dedicated fans, and many of them had already pre-purchased the title. As such, the “collector’s edition” for We Happy Few does not include a copy of the game itself. This is not unheard of, and many games’ collector’s editions have been separated from a copy of the disc. This allows fans who prefer a digital copy to not have to buy the game twice, or allows fans to order the game from their retailer of choice.

With the history leading up to launch, as well as the 60’s setting, the We Happy Few collector’s edition officially became the Time Capsule.

With the context of the Time Capsule explained, let’s jump into how the items for the Time Capsule came to be. Like we stated earlier, the initial PAX East 2015 largely garnered attention for it’s setting, plot, and world. Even on paper, the world of We Happy Few sounds like one you just want to jump in and explore. The game can be described as a 1960’s psychedelic thriller. It is a world where society is mandated to take “Joy,” a pill that makes the user believe the world they live in is happy and perfect. In reality, their world is falling apart and decrepit. Throw in a fitting soundtrack and dangerous enemies who are dead-set on making you take your Joy, and you’ve got a great world for a game.

The base concept of most of the item’s stems from the 1960’s time period. Meanwhile, the actual look and design draws from the game’s psychedelic thriller tones. The propaganda posters are great examples of items that are in-universe and can explore more of the game’s world. They feature ominous messages about taking Joy while in classic 60’s happy-propaganda style. The sticker set follows a similar theme as well. The printed items also include a guidebook for the world and game; it was also designed with the world in mind of course.

The larger items include the Bobby mask, lamp, and alarm clock. The Bobby mask is a replica from the game itself. “Wellies” and “Wellettes” are citizens in the game, all obsessed with taking their Joy. Among them, Bobbies are the police force which pursue you in-game to make you take your Joy. They don a white mask with a permanent smile, and we brought the mask to life for the Time Capsule. It comes on a stand so that it can be displayed easily.  Following that, there is the “You Look Smashing” plexi sign lamp. When turned on, it illuminates the aforementioned message in rich 60’s-esque colors. The digital alarm clock features the main antagonist from the game, Uncle Jack, reminding you to always take your Joy.

It wouldn’t quite feel like a 60’s Time Capsule if the soundtrack weren’t on vinyl. The cover sleeve features a waiting message from the broadcast station. Featured on the soundtrack are The Make Believes, who play original songs created just for the game. The Make Believes specialize in jamming out to the swinging sounds of the 60’s. The vinyl  also features other songs from the game’s official soundtrack.

The physical production of the Time Capsule was no easy feat. We created over 10,000 units of the Time Capsule, and we were dedicated to making sure each and every one matched the highest quality. Several items went through many sample revisions to ensure we got it just right. For example, we went through a handful of iterations of the alarm clock to make sure the clock was both readable and reached the concept we had in mind for it.

Packaging is a key component of creating any collector’s set. A great collector’s edition should have a variety of unique items, but that can make packaging quite difficult. Moreover, any great collector’s edition should also have packaging that ties the set together. The box may not seem important at first, but it is the first thing a consumer will see. It is vital the packaging is not just in-line with the rest of the items, but ties them together. And of course, it has to serve the function of bundling them all together in a neat way.

The main packaging of the Time Capsule is a mid-sized box, with custom die cut dividers for each individual item. Posters, handbook, sticker set, and the soundtrack have their own section in the box as well so there is no chance of them getting bent or crumpled. The art of the Time Capsule box is heavily inspired by the 1960’s color scheme; it is most similar to the “You Look Smashing” sign lamp. The sides feature vibrant colors in either rows or columns. The rows display an eerie phrase, “I’M AFRAID WE’VE COME TO THE END OF OUR TIME,” in a similar vein as the propaganda poster, while also alluding to the thriller hospital tone set in several game trailers. The columns on the box feature silhouettes of the game’s protagonists. On the top opening of the box, the colors of the box are blended into a colorful hypnotic spiral.

For a closer look at each item, check out  Mr. Odd’s unboxing breakdown below!

We hope you enjoyed this in-depth look into the making of the We Happy Few Time Capsule! For more in-depth looks into video game marketing, check out the rest of our blog! 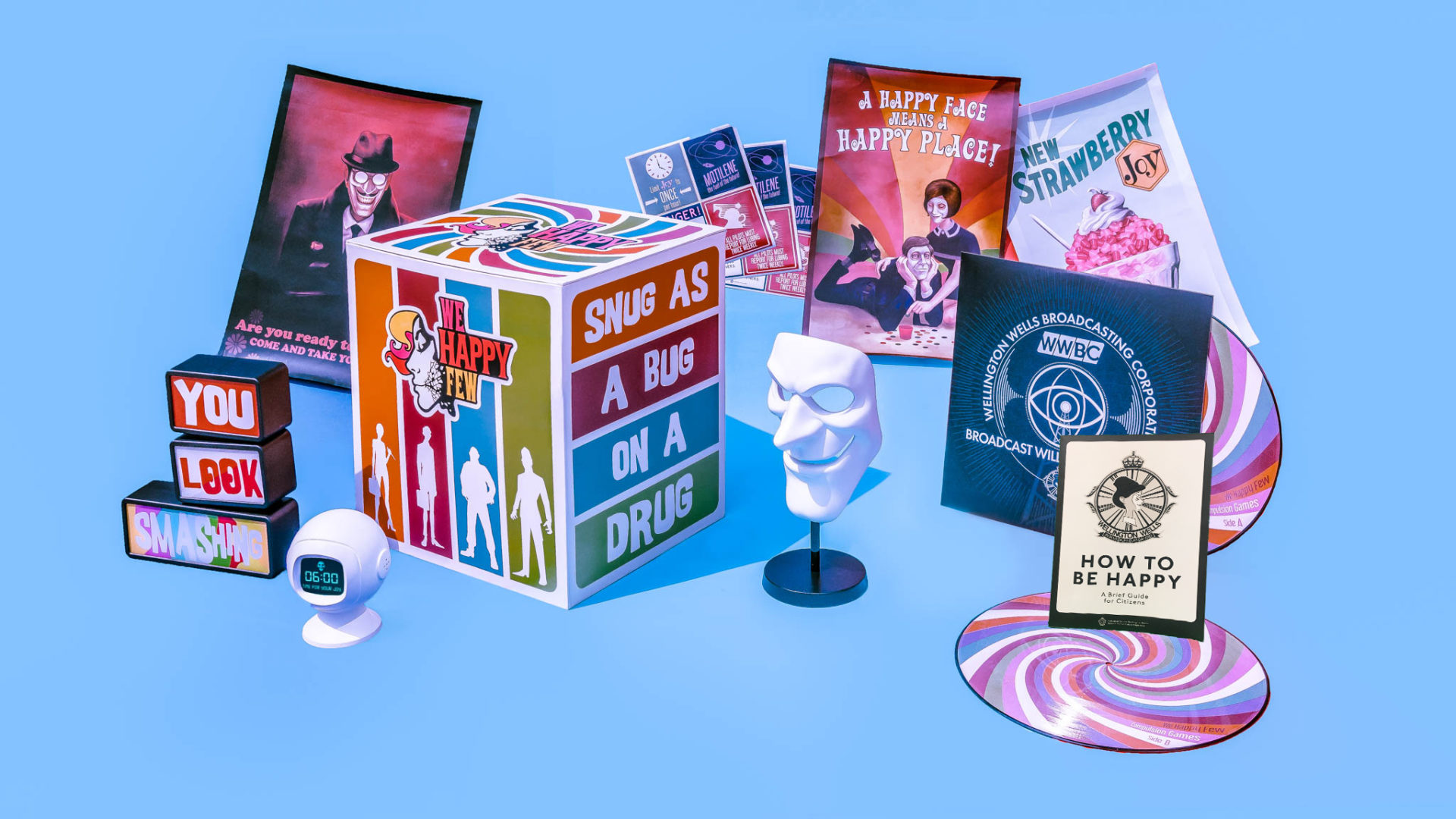